PDM has released 2.0.0 recently, it is mostly complete feature-wise. This post lists and illustrates the important new features, and more details can be seen in the changelog.

When PDM was first created, it was advertised as a package manager supporting the PEP 582 package structure. However, after two years of waiting, the PEP 582 is still in Draft status and has been slow to progress. Although it was a hit at the beginning and attracted a large number of initial users, this has been an impediment to being accepted by the mainstream, limiting its promotion. Also, virtual environments have better support in IDEs and tools. Now I hope that PDM is not only a project of personal interest, but also a package manager that supports the latest Python packaging standards and aims at general developers. So in 2.0, we made virtualenv the default setup for the project.

As much as possible, we make sure that the old project does not break, but only the default way of the new project changes. In the documentation, PEP 582 has also been moved from its most prominent position on the front page to a subpage. In another word, PDM still supports PEP 582, just not in the default way.

Work with other PEP 517 backends

Although PDM is shipped with its own backend2 pdm-pep517, it indeed isn't locked-in with any backend. You can still use backends like flit-core, hatchling and setuptools, as long as it supports reading metadata from PEP 621. You can even mix PDM with other package managers. For instance, you can use flit to build and package your project and use PDM only as a dependency management tool, since the former does not have dependency management capabilities.

This is the great benefit of embracing standards--tools can co-exist with each other, each doing its own job, as long as they follow the standards.

Editable packages are no longer allowed in project dependencies

Originally, in [project]:dependencies in pyproject.toml you could include something like -e ./mypackage, -e git+https://github.com/psf/[email protected] that will be installed in editable mode. However, this is not compliant with the PEP 631 specification, in 2.0 we therefore no longer support this kind of dependencies, and existing editable packages will trigger a warning on installation.

But don't worry, you can still include editable packages in [tool.pdm.dev-dependencies], because they are actually only useful in development.

The PDM global configurations are relocated

Originally, the global configuration of PDM existed under ~/.pdm, but in 2.0 they will be placed under $CONFIG_HOME. The specific values are:

You need to do a one-time migration (Linux for example).

Yes, this is a feature that many users would like to have, and we've finally added it in PDM 2.0! Execute pdm publish and PDM will automatically package the project and upload it to PyPI. Of course, before you do that, you need to configure the repository credentials.

PDM 2.0 changed the UI rendering from click + halo to rich, which provides a one-stop experience and flexible configuration to build a powerful and beautiful UI. The UI remains mostly the same, but the rich implementation is simpler and less buggy. 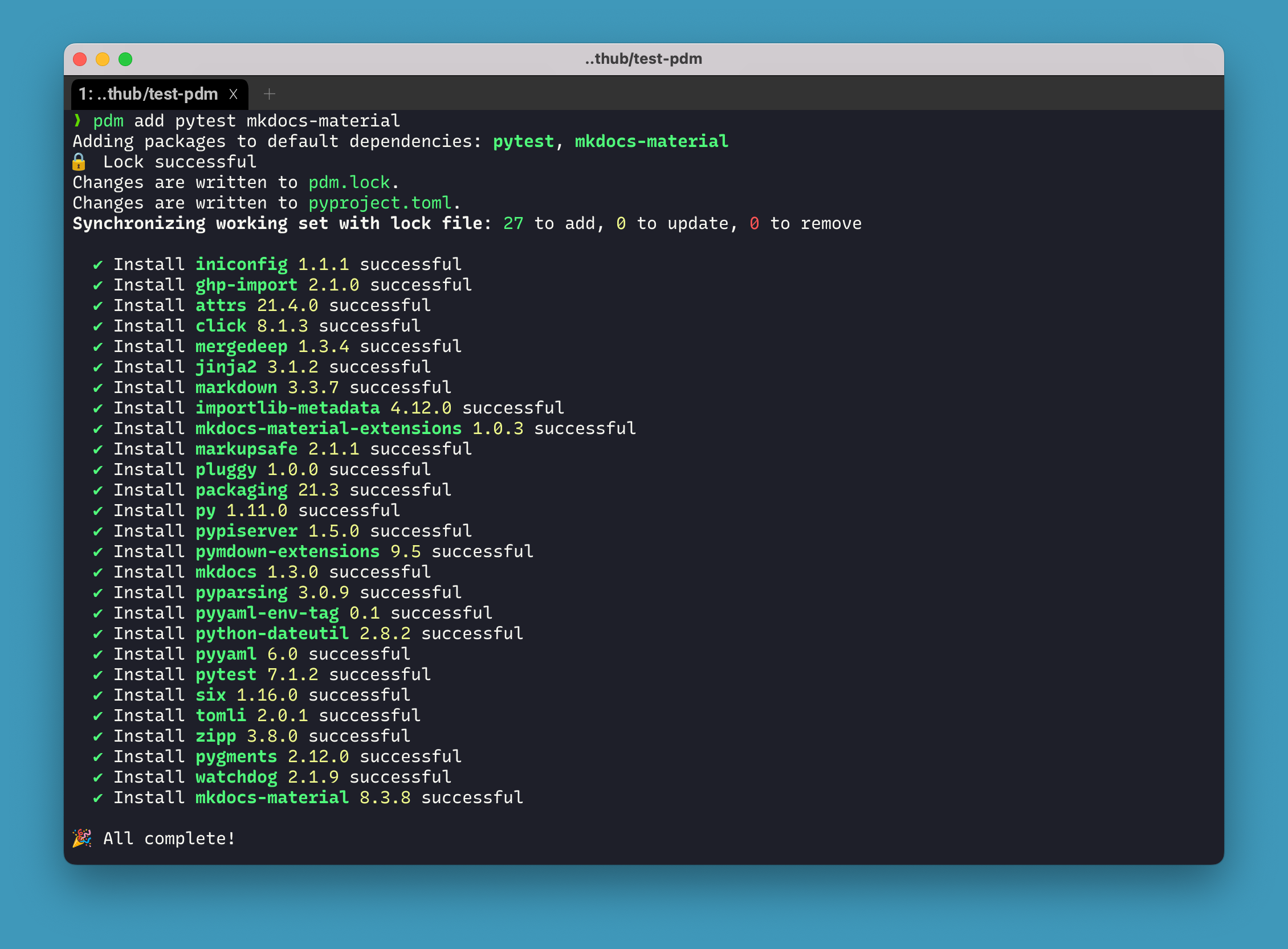 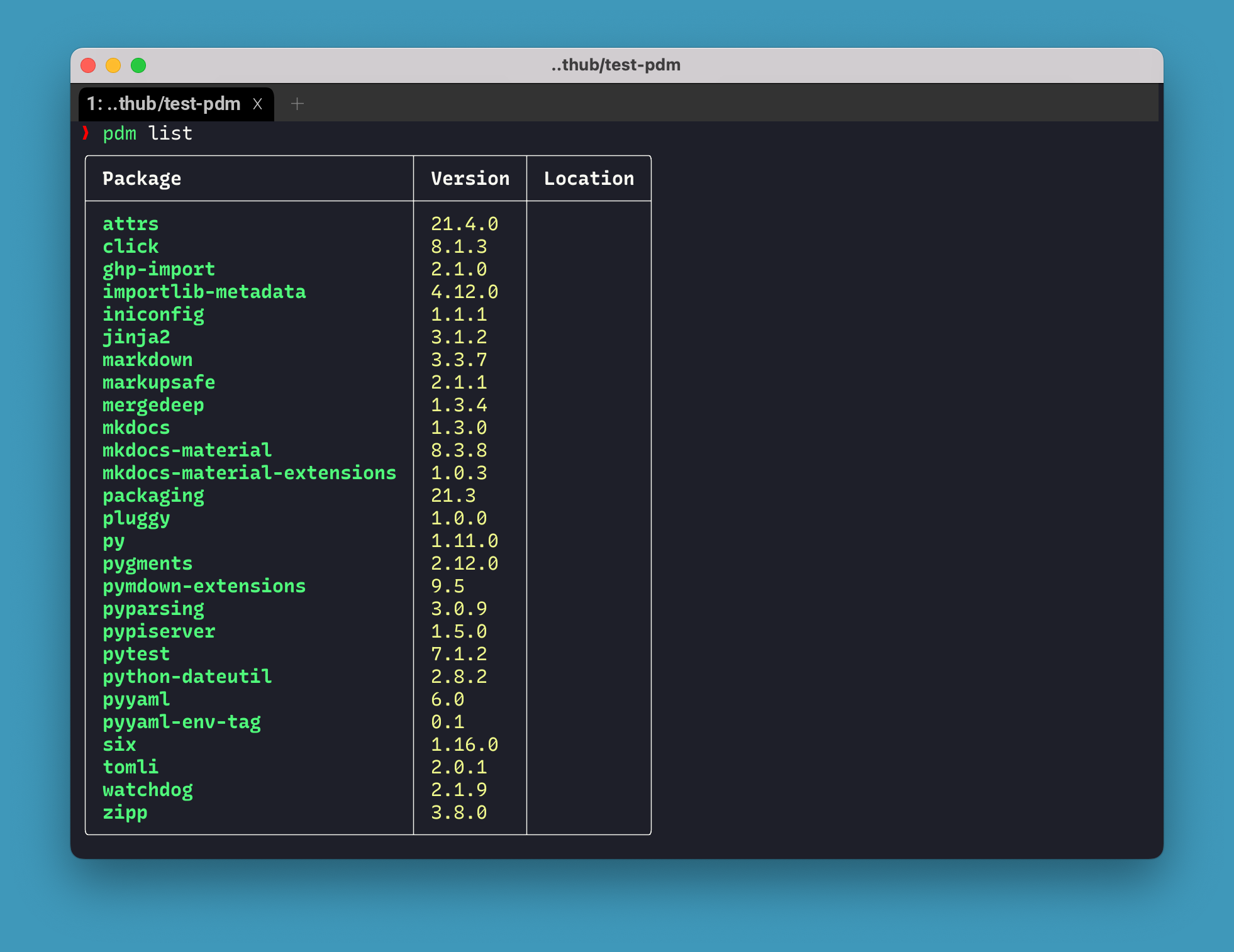 Thanks to @daylinmorgan for the contribution.

Abandon the usage of pip's internals

PDM 1.x used to use some pip internal APIs to find and download packages, but pip is not made as a library and it follows the CalVer release, so even in patch upgrades the API may change and cause PDM to break. Previously, PDM could only limit the version range of pip in the dependencies, but the problem is that pip, as a basic tool, may have been patched in different Linux distributions that may not be compatible. So we completely abandoned the usage of pip's internals and instead built our own wheel unearth for the same work. This will increase stability and also make things easier for downstream packagers.

In previous versions PDM we have added support for user scripts([tool.pdm.scripts], like scripts in package.json). In version 2.0, we have continued to add many features that to make this system more powerful and flexible.

Running pdm run all will execute lint and test.

If you have a script named start, then pdm start and pdm run start will also execute this script, as long as the script name does not conflict with other commands.

Hooks are callback actions that are triggered before and after a specific event happenning in PDM, which can benefit the plugin development. In PDM 2.0 we have added the following hooks:

Please refer to documentation for details on how to use them.

With so many hooks, sometimes you don't want them all to fire. You can use the --skip option to skip some hooks or scripts.

I received a lot of feedbacks and contributions during the development of PDM 2.0, especially from @noirbizarre (who is the author of flask-restplus). He contributed most of the user script functionality. Here I would like to post his comments about PDM in a discussion:

I think the PEP-582 support even if opt-in is already an argument.

Given I started using PDM recently after a painful year (maybe 2) looking for a decent solution (Python project management and packaging have been hell recently):

And I'm sure some points are missing from the list.

To make it clear: PDM is as of today the only Python project management and packaging tool covering the full lifecycle, supporting all recently published PEP on packaging, supporting lock and being able to handle both libs and apps. (And this this why I'm currently in the process of migrating all my projects on PDM)

Welcome to use and test the new PDM version.

If you install with install-pdm.py:

If you install with pipx: